In my work as an equine acupuncturist I come across many sports medicine cases where the horse is in a position of compromised movement, which either hasn’t deteriorated to the extent of an obvious injury or a previous injury which still has an effect on the smooth coordinated movement in the body. In this article I will try to dig into the concept of dysafferentation which is a term used in western and eastern medicine respectively to explain why smooth coordinated movement is effected even if there is no obvious injury present. By doing this I hope to communicate to horse owners the importance of acupuncture and it’s potential for growth in the field of sports medicine as a way to improve conditioning, performance and diagnosis, which will prevent further injuries and not just be a method of treating them.

Dysafferentation is a term used to describe the neuropatho- physiological effects of a joint complex dysfunction that act to generate symptoms such as pain and reduced range of movement. The term ‘dys’ basically means abnormal and ’afferent’ is a nerve carrying a message to the central nervous system from the body. Therefore the abnormality of these afferent fibres causes changes in both resting and working states of muscles which effects joints and thus the movement of the body. To explain the structure of this system we first need to look at the nociceptors located in the body which start the cascade of events which lead to the abnormal movement.

These sensory receptors involved the dysafferentation process are located in different tissues of the body such as muscle bellies, muscle tendon junctions, joint capsules and the skin. They have a high threshold of activation and only overt stimulation can depolarise them, however tissue chemicals such as prostaglandin E-2, leucosin, bradykinin, histamine 5-hyproxytryptamine and local tissue acidity cause muscle and joint nociceptors to become extremely more sensitive, such is the case commonly with joint injuries. Nociceptor sensitisation then causes hyperexcitability and altered neuronal processing in the spinal cord and brain and thus abnormal afferent input =. Dysafferentation.

One type of nociceptor involved in afferent input is the muscle spindle; these gather and send information about the rate of change of muscle length. The fibres from the spindle are involved in spinal cord reflexes that modulate muscle function such as the stretch reflex, recurrent inhibition, reciprocal inhibition and the cross extensor reflex, which all play a vital role in smooth coordinated movement. They are located in greater numbers in muscles involved in fine movements and posture than with gross movement, therefore a horse trained to compete in a dressage event would have developed increased amounts of muscle spindles in muscles associated with more precise and targeted movements.

As part of the dysafferentation system the cerebellum and cerebral cortex regions of the brain are responsible for the proprioception which involves monitoring the afferent input and producing motor efferent output for movement.

The problem of dysafferentation primarily occurs in the nociceptors in the body where degeneration, atrophy and deconditioning of these structures in the muscle and joint structures become hypersensitive and feed inappropriate information to the central nervous system which in turn causes improper motor/efferent impulses into muscles that interrupts the smooth coordinated movement of the body and the condition of muscle hypertonicity. 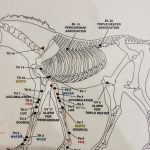