Most of my success over the last 10 years of applying acupuncture to horses has occurred with my regular clients, where I visit their stable on a fortnightly or monthly basis.  I believe the reason why this is that I’m able to apply acupuncture to performance horses when stress hasn’t had a chance to manifest into a deeper level of the body.  In Traditional Chinese Medicine TCM the body can be divided into superficial and deep areas known as the Jing and Luo vessels respectively. If stress manifests at the superficial (Jing) level, tissues such as the muscles, ligaments, tendons, bones and joints will experience pain and obstruction.  If it is managed while at the superficial aspect of the body then only one treatment is needed to resolve it.

However, if left untreated for some time the stress will bypass and manifest into the deeper (Luo) level and manifest as emotional and organ dysfunction, which then further effects the nutrition of all the tissues in the superficial and deeper levels.  Treatment then requires resolving the obstruction of the superficial (Jing) level and treating the emotional and organ dysfunction at the deeper level. This requires 3 – 5 acupuncture treatments and a lower level of stress in training between treatments, until the issue is resolved.

Muscle tightness in the superficial triple heater (TH) and gall bladder (GB) meridians which course through the superficial and lateral aspect of the neck, shoulders, mid thoracic, hindquarters and outer hind limb. Common causes in training could be exercising in hotter conditions and fatigue that forces stress to manifest into these meridians. Treatment would then involve points on the TH and GB to unblock the obstruction and tightness in the meridians.

If left untreated the organs connected to these meridians in the deeper (Luo) aspect then have to work harder to maintain strong energy (Qi) and blood flow through the superficial meridians as stress continually created with further performance. Treatment at this deeper level would involve unblocking the superficial obstruction in the TH and GB meridians but also discovering which organ systems, at the deeper (Luo) level, have been effected. This could be the TH and GB organs themselves or more commonly will be other organ systems, which have to work harder to feed the over stressed superficial meridians. For example, in performance horses it could be the lung and spleen organs which play an important role, in producing and moving energy (Qi) and blood in the body. 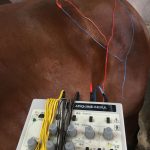